You are here
Home > Fixture
Fans of Cricket have great news that ICC Cricket World Cup 2019 schedule has announced now which will be going to stage in England and Wales. ICC Cricket World Cup 2019 tournament will be the 12thedition of cricket world cup which will be scheduled to play from 30 May to 14 July 2019. This will be the fifth time that the cricket world cup tournament will be staged in England and Wales including 1975, 1979, 1983 and 1999 world cups. 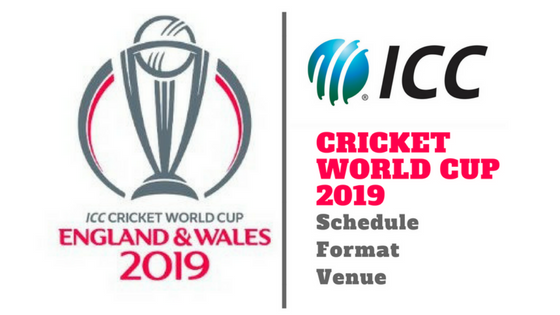 The format of this tournament will be one day international. Total of 10 teams will be participated in this tournament. A single group of ten teams in which each team will play with the other nine teams and the top four teams will proceed to the next stage that will be knockout stage of semi finals and then final match will be held.

There are a total of 48 matches to be played during ICC World Cup 2019 Cricket tournament. The first match will be scheduled to play in between England vs South Africa on 30 May 2019 in The Oval, London and the final clash will be on 14 July 2019 in Lord’s, London.  All the timing are in British Summer Time (UTC+01:00). The complete fixture is as follows